Happy Companies Make Loyal Employees – The Cost of an Office Bully; First in a Series 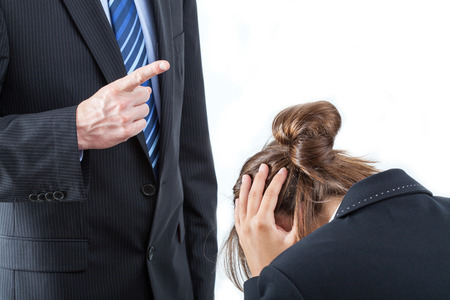 Happy Companies Make Loyal Employees – The Cost of an Office Bully; First in a Series

Unhappy corporate cultures are common and have many costs. Some costs are direct such as high absenteeism and turnover. Far more often, the costs are hidden. Derived from fear-driven actions, these behaviors can damage the company. The following two stories from the book, What Happy Companies Know by Dan Baker, Ph.D, Cathy Greenberg, Ph.D and Collins Hemingway, MA show how corrosive fear and mistrust can become.

Personal Divisiveness. Demonstrating the problem of personal divisiveness, the first example involves a mid-level information systems manage at a major bank. Needing to take down the computer system for urgent maintenance, the IS manager had received approval from the most senior executive in the division. She issued a memo to all department heads alerting them of the shutdown the next day and the need to schedule important bank transactions around it. Shortly before the scheduled maintenance time, one of the department heads came to her office door and complained that the shutdown was going to seriously affect his department’s work. He was a large, physical man, and he reached up to grab the top of the door frame, blocking entry to her office – as well as her escape.  Growing ever angrier, he insisted that the younger manager reschedule around his needs. Through her office window, the IS manager was able to catch the eye of the more senior executive. This individual sauntered over as if he just happened to be passing by. His appearance caused the department head to back down. Having lost the fight he had picked, the department head promptly returned to his area and spent the afternoon screaming at his staff.

Organizational Divisiveness. Demonstrating the problem of corporate divisiveness, the second example involves a Japanese manufacturing company and its American subsidiary. In the early 1990s, the company developed a reputation for not being able to meet product demand in the United States. The parts were manufactured in Japan and assembled in the United States, so that the machines were officially “made in the USA.” To solve the problem of product shortages, the manufacturer brought in an outside consultant to improve its supply-chain management.

Before long, the consultant recognized that the problems were not technical but relational. The American subsidiary had the habit of placing a large number of orders, then canceling the orders months later – after the U.S. salespeople had received their bonuses for the sales. When the Japanese headquarters realized what was going on, the senior executives there arbitrarily cut ongoing U.S. orders by 50 percent.

In other words, rather than tackle head-on the subsidiary’s bogus bookings, headquarters guessed at what the actual orders were so as not to over manufacture parts. A bizarre dynamic emerged. When orders were fake, salespeople received undeserved bonuses. When orders were real, the arbitrary cutbacks meant that salespeople were unable to deliver sufficient product, which cost them bonuses and future sales. The supply-chain management project was Japan’s way of solving the difficulty without creating a conflict. It took months before the consultant could bring the two sides together to confront the unsavory behavior of the American subsidiary as well as the enabling behavior of their Japanese counterparts.

If you have worked in a corporate culture, you know that almost every office has at least one bully. And, most people learn to work around such individuals. However, corporations seldom consider how much time and energy is absorbed in those accommodations. In the first example, the bank bully did not read the memo. He would have gladly disrupted operations for several other departments to suit his needs and to cover up the fact that he did not bother to read the memo. Instead, he had to be satisfied with disrupting productivity in his own department for much of the day with his tantrum(s). If this behavior continued, he could leave his department in such shambles, workers could request to be reassigned and just think of the training costs associated with bringing in a new team; not to mention the impact on project delivery. In the Japanese company the conflict between the organizations took the company into the red for some product lines. Higher level bullies can bring an entire organization down. Think WorldCom and HealthSouth. The intimidation and manipulation resulted not only in business failure but in the indictment of individuals on criminal and civil charges.

In most cases, companies are unwilling to confront either personal or organizational conflict in a constructive manner. In fact, they may not even acknowledge that social conflict exists. They seek answers through analysis, reorganization designed to shake up performance, or misapplied technology solutions such as the Japanese company’s supply-chain solution which glosses over deep human issues rather than address them.

Call it what it is. These companies are dysfunctional. And, dysfunctional companies are not “happy” and neither are their employees. Happiness is an attitude, not an emotion. It is a prevailing way of life, an overriding outlook composed of qualities such as optimism, courage, love and fulfillment. Corporate happiness has the same composition. Happiness is not a mood but an approach toward life. Happiness is knowing what is truly important and living in accordance with what is important. As happiness applies to the psyche of an individual, it applies to the culture of a company. If immediate gratification is the mark of a child and delayed gratification the mark of an adult, so too is short-term thinking the mark of an immature company and long-term thinking the mark of a mature one. Short-term thinking is fear-driven, which means that it is not thinking at all, but a gut-level reaction. Long-term thinking is conscious, proactive contemplation of what truly matters.

Fun is not the goal at work. Yet, fun naturally arises when people do work that they enjoy and find meaningful. The biggest reason people quit a job is not the company or the nature of the work but the hatred or distrust they have for their boss. Roy Lubit, in his book about toxic managers, suggests a reason for that, symptoms of serious personality disorders are often mistaken for “leadership” in today’s aggressive marketplace.

Companies with engaged and enthusiastic CEOs and employees tend to do well. Such jobs are happy occupations. As the old adage goes, “Find a job you love, and you’ll never have to work.”